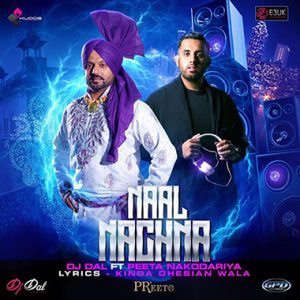 International DJ Dal who is part of the leading Kudos UK Audio and Visual Company is all set to release his debut single ‘Naal Nachna’. The track feature’s the vocals of Peeta Nakodoriya who is the lead singer from the world-renowned Bhangra dance group ‘Gabhru Punjab De’.

Peeta and Dj Dal collaboration came from performing together at various events across the globe.

Dj Dal has worked tirelessly behind the scenes to put together his first single. The track ‘Naal Nachna’ is being released worldwide via E3UK Records on the 20th July 2017.

Naal Nachna is described as an upbeat party song with catchy lyrics, bound to be a sure hit and have you on the dancefloor. The lyrics have been penned by Punjabi born Kinda Dhesian Wala.

The video has been shot in Chandigarh and was Directed by Jack Sarwan, the desi visuals on this track has been captured beautifully in the heart of Punjab. Both Dal and Peeta have a massive passion for Panjabi music and this musical energy spilled into the studio to record ‘Naal Nachna’.

Naal Nachna is due to be released 20th July 2017 exclusively on E3UK Records.

You can follow Dj Dal on the below social links:

Get your free CD

Aswell as downloading any free mix you can also get a free CD of my latest mixtape "Turn Up vol 1". Simply fill in your details and I will send out a copy.